An Osamodas father, Chairmane and his son, Chung, were selling their freshwater Snappers throughout the nations. Grasping the opportunity that the exceptional opening of Mount Zinit from Flovor 28 through Martalo 3 afforded them, they headed for the summit looking for rare finds. Along the road, they ran into a mysterious Sadida trapper, Kimar Renwar… 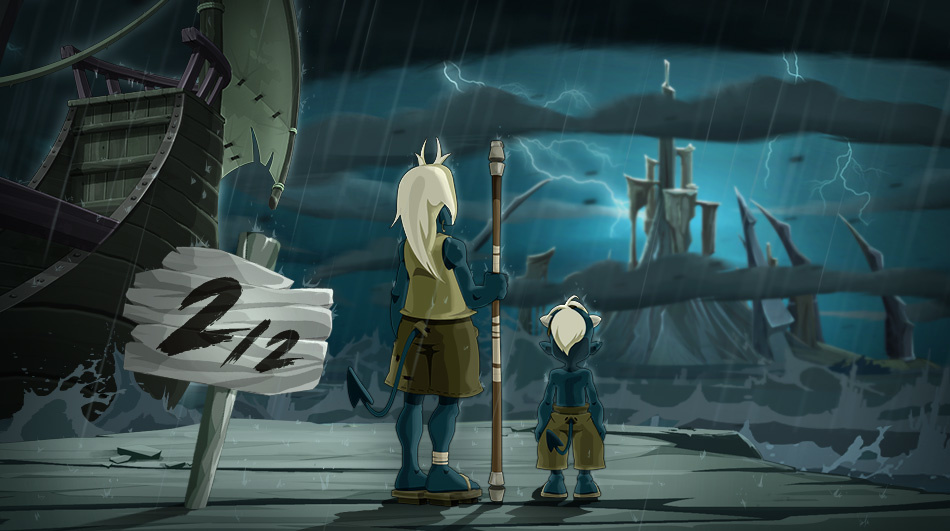 Voyages sometimes have the same virtues as the best Pandala liqueurs – intoxicating, they too tend to bring those who share them closer together. Thus, after a few hours together on a wagon traveling over snowy lands and spinning tales about their greatest adventures, the Osamodas Fifis and the Sadida Renwar had become friends. Once on the Astrub docks, the trapper decided to follow the fishermen up Mount Zinit to try to find a few rare, fantastical beasts for himself. As they were boarding a two-mast sailboat and stowing their belongings in the hull compartments, Chairmane turned to the trapper.

"Aren't you going to sell your last catch while we're here in Astrub, friend? It would be that much less to stow in the hold…"

"I… yes, well… I'll sell some of the meat but… I'll sell the skin when we get back… with the extraordinary game I'll bring back from Zinit! I'd hate to rush and sell it for less than it's worth…"

Young Chung couldn't help but notice Kimar's hesitation and discomfort, but he said nothing and continued stowing their goods on board.

The crew lifted anchor as the first rays of sun emerged. Sitting on the forward deck, our three companions let themselves be carried by the gentle waves and invigorating breeze. They gazed at the rocky peak on the horizon and the luminous circle rising slowly to its tip. Behind them, at the helm, the Enutrof helmsman stood above them. Rhuddyr Starbhor was guiding the ship with calm confidence. With a military cap pushed firmly down on his head, dark sunglasses covering his eyes, either he was staring at his goal doggedly or… sleeping deeply! Chung had been watching him for some time and couldn't have guessed which it was… Soushi Chen, an Ecaflip sailor and fisherman, had moved to the poop to prepare the nets. He'd rolled his pants up above his knees and tied a red bandana around his forehead. Captain Dai Kiri emerged from his cabin just then and walked over to his passengers. Ramrod straight, arms folded behind him, the Xelor was the very image of exemplary rigor. His greatcoat and sailor's hat gave him a quite the air – he looked more like the captain of a warship than the captain of a modest fishing boat.

"Such an enticing vision, is it not?" he said without the slightest hint of emotion. "I hope you'll find rarities on that rock."

"Don't worry. If we come back empty-handed…"
"Or don't come back at all."
"… Um… Yes, well…" continued Chairmane, "either way, you'll get to keep the deposit."
"That goes without saying. I was just making conversion." (He looked at the sky and then the taut mainsail.) "We'll be there tomorrow morning, around 8 o'clock."

They spent most of their time dropping nets and fish traps as they slowly neared the coast. As night fell, the sea air and day's activities got to the crew. They said goodnight before the last rays of the sun were gone. Only Rhuddyr Starbhor remained at his station. Before heading to his bunk, Chung stared at him intently, but the Enutrof didn't flinch.

A shout. From the hold. Chung joined his father and the captain in the hold where the provisions were stored. Soushi Chen had just discovered sheer havoc. Kimar arrived in turn.

"What's going on?" asked the trapper.

"Our rations! Devoured! All of them. There's nothing left but empty crates and torn packaging! WHO DID IT?"
"Calm down, Chen," ordered Captain Dai Kiri.
"Calm down?! I worked all day! I'm hungry!!!"
"We'll find out who did this. And you will eat." (The captain looked carefully around the room, moved toward the wreckage, and pulled out an apple that had been spared. He handed it to the sailor.)"Tomorrow, we'll lift the nearest traps for breakfast. Until then, get some shuteye, you did a hard day's work."

The Ecaflip's gloomy face softened a little. He stared at Chung, Chairmane and Kimar, then ripped of the stem of the apple with his teeth and spit it onto the floor. He big loudly down on the piece of fruit and left the room. The Osamodas father spoke up.

"Captain, we were with you all da…"

The Xelor lifted a bag of flour to reveal footprints in the white powder. Tiny footprints.

"You know what they say about small feet?"

Captain Dai Kiri inspected his guests' belongings. The Osamodas were transporting only fishing equipment and clothing; their provisions had been devoured along with the rest. The Sadida had a Bearbarian skin cut into three pieces, and eight squares of fabric with strange symbols embroidered on them.

"I sold some of it in port, and the rest suffered the same fate as everyone else's provisions."

Dai Kiri let his guests go to bed. He'd get to the bottom of things tomorrow.

A shout. On the bridge.

"Not again," complained Kimar, "this is becoming a habit."

The three travelers hurriedly left their bunks. The scene they discovered left them stunned…Scattered everywhere were fish, shellfish and squid. Fish traps and a net had been pulled up and were littered around the deck. The captain, who until then had been cold and distant… was rolling on the floor laughing.

Behind the helm, the helmsman was a sorry sight: lipstick on his face, naked as the day he was born under a Bearbarian skin, eyes drawn on his glasses, and a squid in guise of a hat. No doubt about it. He was sound asleep! At the back of the boat, in the net hanging above the sea, Soushi Chen was struggling: tied up, his red bandana serving as a gag, he was covered with mollusks and affectionate starfish! Quiet, demonic giggles seemed to be coming from the prow… The group went over and saw… very excited Sadida dolls! Some were gnawing on the wale of the ship, others were gorging themselves on fish, one of them was chewing on Rhuddyr Starbhor's pants… They seemed possessed!

The captain got over his laughing fit and recognized the strange symbols he'd seen yesterday on the trapper's "rags" on the creatures. The Sadida went to his dolls, pulled eight white shigekax out of his pocket, and held them out. The dolls rushed to their master's outstretched hand to devour the candies. A few seconds later, they fell asleep and turned back into squares of cloth.

"The candies calm them down temporarily."

The trapper turned to the crew with a sad look on his face.

"Please accept my apologies for the trouble…"

"And the damage," added Captain Dai Kiri.
"And the damage, of course." (He turned to Chairmane and Chung.) "I'm sorry I didn't tell you, but I had to keep them hidden. They've come down with a rare and strange illness and have been ravaging everything in their path ever since. You would never have taken me with you if I'd told you… if you'd seen them… and I didn't know you yet… I was already on my way to Mount Zinit when you found me. An Eniripsa mage advised me to get some Dathura urtica – also known as tear nettle – a very rare plant that is said to have sprouted from Ogrest's tears. Its main virtue is balancing the emotions of anyone who eats it."
"And the Bearbarian?" asked Chung.
"They're the ones who attacked it. They were… very hungry. They're insatiable! Everything else is true. I swear! Can you ever forgive me?"

The father and son exchanged a kindly smile and nodded their heads as a sign of approval. Kimar couldn't help but hug them.

Hear ye, hear ye, freshwater sailors, children and gentlemen! The "Gruber", fishing boat and cruise ship, is entering Mount Zinit harbor! Its crew would like to thank you for sailing with us and hopes you've had a pleasant journey. Yipee-ki-yay, my floating friends!"

The three traveling companions couldn't believe it, but it was Rhuddyr Starbhor who, still wearing the squid on his head and his painted glasses, had proclaimed that they'd reached their destination while Captain Dai Kiri was helping a furious Soushi Chen out of his net. Chung, Chairmane and Kimar would finally be able to set foot on Zinit.